After saying goodbye to my friend “G” this morning I turned around to see what looked like dirt scattered on my living room floor.

“Hmmm.” I thought to myself “That’s funny, I don’t remember that being there before.”

Then I noticed there was a trail of dirt running through my living room, a la Hansel and Gretel. So I followed that trail and what do you think I found? Dirt, well potting soil to be exact, scattered all over my bedroom floor! Who could have or would have done such a terribly messy thing? 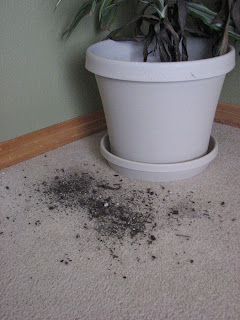 Well, I think I found the culprit…If you look closely you can see the evidence on her shoulder stuck to her sweater. Since I am the judge, the jury, and the prosecution in this trial: I officially charged her, and found her guilty of trespassing in my bedroom, endangerment of a plant and leaving the scene of a crime. Bailiff take her away! 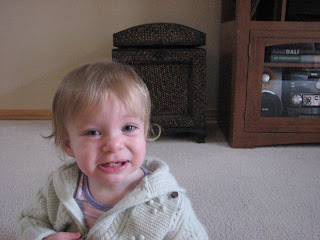 Now if only I could get her to do more with the Vacuum than stand on it or push it over. 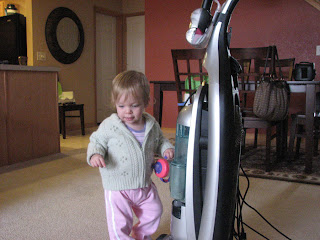 Some of you might be thinking “Oh, what a cutie” to which I would reply yes she is, but today as she went in for her second dirt party with my plant (I caught her in the act this time) I didn’t think it was all that cute. In fact I would venture to say I thought it was definitely less than cute. 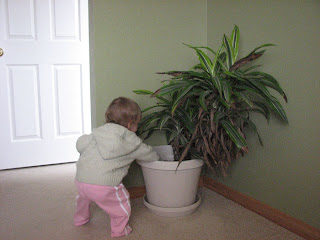 So now I am off to vacuum, again. For the second time in 20 minutes. The Beach – A Thousand Words Thursday What You Could Win… The Toddler Who Stole Christmas…