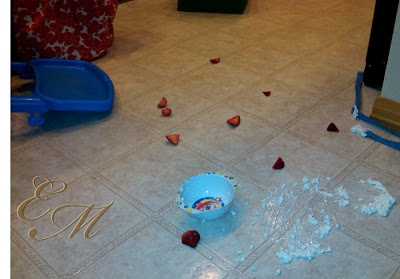 Let me set the scene for you.

Picture a Mother and her toddler daughter getting home from a morning out and about. After asking what the toddler would like for lunch the mother sets out to prepare the toddlers requested meal, strawberries and cottage cheese. When the lunch is fully prepared and placed on the child’s tray the girl informs her mother that she doesn’t want to eat.

So the stupid mother leaves tray sitting on the counter to give her daughter a few more minutes to play and runs to the restroom. After being absent from the kitchen for less than a minute the mother returns to find that her darling demon child has taken the tray of food off the counter, dumped all the food off the tray, dumped the cottage cheese onto the floor and then spread the cottage cheese with her hands around the floor like finger paint.

For those of you who are thinking spilling the food all over the floor was an accident I would like to take this opportunity to say, there is no freaking way this is an accident. No.Freaking.Way.

Here is how I know. Last night she asked for a snack while I was making dinner. So I handed her a banana and turned back to the stove to give the meat sauce a stir and when I turned back to her half the banana had been pulverized and thrown to the floor at my darling daughter’s feet.

Two Days ago her cereal bowl mysteriously ended up upside down on the kitchen floor. Actually it isn’t a mystery at all since I watched her take the bowl in her hands and toss it over the side of her tray.

Or how about last week when instead of eating her corn bread muffin she smashed it into a gazillion crumbs and then tried to brush them from her tray onto the floor.

Are you beginning to see where I am coming from?

We have tried timeouts.

We’ve tried reasoning with her.

Telling her how sad or angry it made us made no difference to her.

Taking her food away can only work for so long because eventually I have to feed the kid.

She even got moved from the dinning table with us back into the kitchen so she isn’t sitting directly over the dining room carpet, which although she hates has not done a thing to curb the behavior.

We have praised her good behavior, but positively reinforcing her behavior after meals without freak-outs has done very little.

But, Catherine, she’s only two, blah blah blah, yada yada yada. Whether two or twelve this behavior doesn’t fly in my house.

Someone please help me survive two, because if this lasts much longer I am going to need a trip to a psych ward. I don’t like the mess but the thing I cannot handle is the waste. Wasting food and Catherine do not go well together and she is pushing me to my limits.

I need suggestions for dealing with this issue. Yes, she is a toddler and toddlers are tough but there must be a way to get her to stop destroying food and destroying my kitchen in the process instead of eating.

To Swim or Not To Swim? 5 Little Things…That Got Me Through The Week Under the Influence – We try to have her clean it up as best a 2 year old can. Sometimes it is quite a fight though.

Everyday mom of 1- We had her sitting with us at the table in her booster seat for quite a while and got tired of cleaning up food mess from the carpet so we moved her backward about 3 feet into the kitchen (over the linoleum), she hates it but the clean up is way easier.

Deb- I like the idea of trying to redirect the behavior to something else away from eating and meal times. I'll have to look into it.